Skip to content
HomeTale of the Tail
Tuesday started in Knoxville and ended at the Iron Horse motorcycle lodge, an inn, hostel, and campground specifically for those on two wheels.

I programmed the GPS for the long way around, saving the scenic mountain routes for tomorrow, without my top heavy luggage. The I followed her voice as she said turn here and there to follow “the shortest route”. I realized that I must have reset my phone at some point when she delivered me directly to the northern start of “tail of the dragon”
I stopped at a quikee mart, to have a coffee and decide what to do. I bumped into a guy my age emerging from the south with a big grin. He was from virginia, on a suzuki, and his wife no longer rides. So he now does day trips and quick weekends lugging the bike in the bed of his big pickup truck.
He said the dragon was perfect right now, nearly empty, cool, quiet, and that he was thrilled. Hmmm. He talked about how Saturdays are cray, even Fridays and Mondays, with “kids riding the dragon standing up
on their seats” (like surfing). I heard of the dangerous mix of rally cars and racing bikes making a simple

guy like me more target than spectator.
With his words I sent him north and I waded in south. It was delightful. After a couple miles, I pulled off to take pix, drink a
gatorade, and informally time traffic; 90 sec to 3 minutes between. I committed to riding the dragons tail. (Rt129)
In the hairpins I averaged 25 mph and the top heavy luggage seemed to stabilize me, in the few straightaway I averaged 45. Nobody appeared in my mirror. Not once. I stopped to take more pictures.
Entrepreneurs have setup tents and take hi-res pix of you at different corners, with a big banner of their website (ex: dragon-pix.com, etc) You can go back later and buy a digital momento of you “slaying the dragon” just like on the log flume at WDW. *sigh*
I became drowsey from the mix of concentration and granola bars, and immediately pulled off. I actually sat down and closed my eys “just for a few minute” with leonard cohen playing in my helmet.
I was awoken by a voice: “Sir? Sir! Are you OK?” How wonderful. Again and again I find that the ‘community of bikers’ look out for each other (and I’ve been swept up in that net). The couple times I’ve broken down, someone immediately babysat me. They let me merge, roll first at stop signs (so i don’t have to put my foot down), and now someone checked that I wasn’t, well, dead. It’s been a great experience.
At the Iron Horse I stayed in “the bunkhouse” because it’s too euro for bikers to stay in a “hostel”. As I joke, they eat Long Johns, not Eclairs, as well. My roomie must be a ninja, or I’m exhausted, as I was expecting his clunking around to wake me up,, and I almost missed breakfast!
Today, the Cherohala trail, with no luggage! 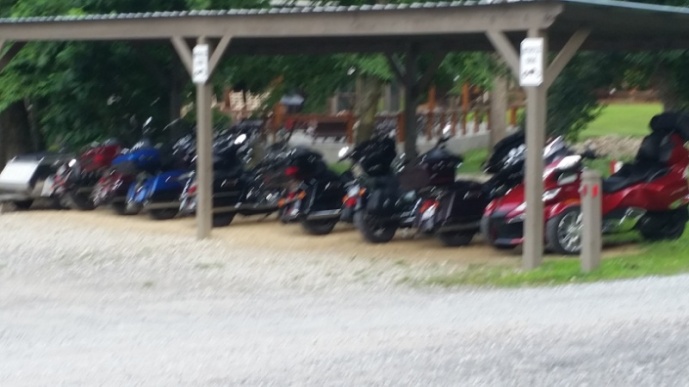