My time in Traverse City, and now Grand Rapids has been filled with the most interesting, informative, inspiring, and delightful people. I met all of these in the last third of my time in Michigan, in just the one week after AMUUSE csmp.

In Traverse City, I first spent a day in Empire, with a man I met at the CNU

conference in May. He is, essentially a property developer, only not in the traditional sense. If when you hear “property developer” you think of carpet bagger, slap and dash, money first screw the customer … that’s ok, so do I. He is not. He long ago adopted the principles of New Urbanism. He admitted, finally, that he wasn’t in Detroit to particularly learn anything (I was thinking he could teach most sessions), but was really looking for contacts, clients, someone to help in the north country with his project as he closes in on retirement. I would love to be able to help, but we will see.

The property in Empire was been created slowly, over years, and is energy efficient with large porches and rear access garages. There are no front driveways and no front garage doors. It is a neighborhood of human scale, pleasing to the eye, and an immediate throwback to earlier times.

I asked about alleyways during snowy northern Michigan winters and he said alleys simply got plowed like streets. I noted that alleys created short driveways, sometimes as short as 4 feet.

Also, the rear garages supported a second living unit without overcrowding the visual

Frame of the property. Throughout Empire, homes had sizable over the garage “apartments” without costing the city any of its charm.

They lived in an historic home, that was “saved” and “hauled into the city”, he said. He also “saved” the house next door. He even pointed to the square openings along the top of the basement ridge “where the I-Beams sat during transit”. It took a while to understand, but

the two farmhouses were out among the adjacent  farm lands acquired by the feds as part of the continuing process to consolidate land for Sleeping Bear Dunes NP. If the owner has only had possession of their place less than 10 years, the feds use eminent domain and buy it from you. Until recently they would level all the buildings and let the woods slowly reclaim the land back to nature. In this case, the historic period house was rescued by literally hauling it into town, from its location on the National Parks acquired land. Pretty Cool. So you know, those that have owned their farms longer than 10 years (been in the family), can keep it, but it will remain a farm. These patch work of farm land within the greater national park cannot be rezoned for motels, or restaurants or casinos or bars. They have been a family farm and you can maintain them as a family farm. Or you can sell them to the government.

His wife was intelligent and articulate and their banter was beyond entertaining. She is a tenured college professor on summer break. I stayed with them Saturday night and they sponsor a Quaker meeting every Sunday morning. It was my privilege to join them for a half hour of acapella singing and an hour of silent meditation followed by individual preaching as one feels moved. Afterward, we adjourned as a group to the dining room table to nosh on fresh picked berries and vegetables people had brought from home and talk about the week, my trip, and people and places we have in common.

I was sent up to Port Oneida Michigan, which was having pioneer days, an annual event of historic farm reenactors.

Draft oxen and horses, along with historical farm equipment are brought in and used in demonstration. The four adjoining farms, like many abutting Empire, are now part of the Federal reserve for the Sleeping Bear Dunes. However, where most have been leveled with woods being allowed to reclaim the space, an administrative decision was made to retain these 4 historic parcels. Part of the NPS charter is to preserve history, along with preserving nature. So these barns and fields are minimally maintained, but this one week-end each year are a full-blown carnival of reennacting, period music, and historic crafts and skills, and my visit in mid-August just happened to coincide with the annual event.

In Interlochen, I stayed in a rustic hostel. I later learned it had a mixed history, but was for a period a restaurant.

The “Bunk-room” with one wagon wheel chandelier was half the dining room and the common area with its matching wagon wheel with the other half. What was previously the kitchen and cooler / freezer have been bricked off as separate units. Individual cabins are separate units as are parts of the house on the adjoining property, one of the oldest buildings in town.

This property can eke out an existence by optimizing this mix. Part of it is the hostel, with its daily caretaker. Some of the units are short term / Vacation rentals while others are long term (“year round”) for locals. Also, next door has a tourist based business, and they also sell firewood, composting and they have a giant vegetable garden. Eking out an existence. I did not think to ask if any of the apartments receive subsidizing.

I met the caretaker and her lovely daughter. We talked about the demographics and how the town of Interlochen is one of the poorest in Leelenau county (the “year round” people). Of course, their neighbors are artists in salons, winery owners, and cottages for wealthy down staters. I commented it was just like Florida: millionaires, and motel maids. And as I said that, I realized as “hostel caretaker” one might say she was, essentially, a very responsible highly skilled “motel maid”.

She offered me lots of ideas how I might enjoy my visit, where to go and what to see, but also two memorable stories about life for “Year Round” residents. I asked about the fairly new school directly across the street and was told it was recently closed, as part of consolidation with decreased enrollment. It cant be proved, but she suspects its because it serves the lowest income students. While the students can be bussed to other schools, the parents without cars would walk their kids to and from this school, and would walk to conferences and events. Now they must find a way for transportation or lose their teacher involvement. There was a school elsewhere in the county slated to close and an “anonymous donor” gave over half a million dollars to enable the school to remain open. I wasn’t, and am still not sure how I feel about that. Some rich guy wrote a check for $600k, and his daughter doesn’t have to ride the bus. Neither her friends or the kids in his neighborhood. If you can’t write a check, its the bus for the kids and hitch a ride to teacher conferences for the parents. That seems wrong. Also, I assume the check only covers two to three years operation, until his son or daughter moves onto high school. Then, who cares, close the school down. Again, I’m not sure how I feel about that, but it sure feels wrong. But what difference if the “donor” gave that money to a private school, as tuition and an endowment?

On my way south, I stopped in Manistee to visit a new friend. He is hosting Juan, my Dunedin film buddy, and they go way back. We all had dinner in Traverse City and he demanded I stop by on my way south. He now makes his living working as a wood sculptor after years as in construction. He was injured in an accident and is wheelchair bound, but lives in an otherwise idyllic setting of his boyhood. In high school, he actually worked on the very property he later purchased, where he now lives.

The property has a cabin, for rent, which has helped pay the taxes and pay the bills, since the time decades ago he helped the previous owner build the thing. Visitors stay a week or two, and relax in the calm northern michigan serene wilderness. He said this year has been tough due to AirBnb. Down staters could easily find different places to stay so he had many vacant weeks. Later, when he listed with AirBnb, he had to lower his prices and still had unused availability. For decades “rental cabins” ran through brokers with ads in vacation magazines. But the internet, and how people vacation, has put him in a financial bind.

I was amazed to see his various pieces, both complete and in process, and his giant stores of raw wood. Much was salvaged from barns, sawmill end pieces, and collapsed buildings. As a total novice, I could immediately see how many pieces had interesting shapes, curls, and notches for creating sculpted wood art. 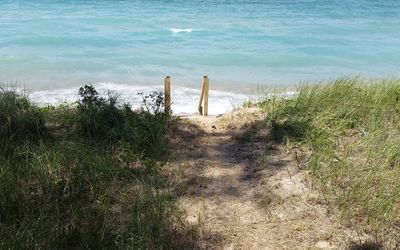 It was a long drive to Grand Rapids racing down US 131.