I wasn’t paying attention again, landing in DC and driving to Metro NYC on September 10th. Gee , why was every overpass festooned with American flags?
The small town of Marlboro NJ lost 14 Souls on 9/11, employed at WTC or involved in the emergency. This neighborhood seems to be a migration point from a small part of Brooklyn, as the kids grew up and families moved to the suburbs. Everyone knows the old stores, delis & synagogues.
For me, 911 was a national tragedy, resulting in national action and policy. But here in Marlboro, it was very local, touching the lives of neighbors and family and friends. People could smell the burning for days and watched umclaimed cars towed home from park and ride lots.
This morning I attended a city memorial service. 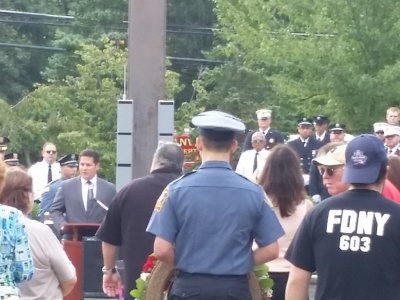 The memorial in the city park has a beam from the tower with the names inscribed on marble. A member of each of the fourteen families place flowers and American flag in turn while the high school band and choir played and quietly singing “America the Beautiful”.
The large semicircle behind the mayor and congressman had dozens of full dress police, fire, EMS, and disaster crew, each with their badge wrapped in a black memorial ribbon. Behind it all sat a fire truck, ambulance, police car, and mandatory extended ladder truck hoisting the oversized American flag.

An honor guard discharged rifles, the flags were lowered to half-staff, and the ceremony was suddenly interrupted twice, at 8:46 and 9:02, for the moment of each impact.

The benediction was given by a local rabbi paraphrasing a famous work. It went by too fast, but something like this:
We have shared a tragedy, let us draw upon it for a lesson. From hate the lesson of love; from division of unity. That day took existing lines of division and made then large and dark and we found ourselves occupying their shadows. Let us see that is not the lesson.
The perpetrators on 911 saw only differences and hate flowed against any not like themselves. The lesson we can draw is to love each, regardless of differences.
It was a courageous message to deliver to one tough audience.